Texas knows tacos, and Austin has a very intimate relationship with the popular food. So when the national Tortilla Awards came to Parlor & Yard on Tuesday, September 11, five local restaurants jumped at the chance to compete.

Austin was the last stop on the three-city tour of powerhouse culinary cities – Los Angeles and Chicago being the first two – and at the end of the night, two local tortilla makers were crowned champions.

Celebrity chef Aarón Sánchez was head judge and he sampled tacos from all of the competing chefs. From jackfruit tacos in soft corn tortillas from Cool Beans to wild boar al pastor al carbon from Dai Due, Sánchez watched chefs get creative with the batter to elevate the often humble tortilla.

If you’ve recently purchased 365 Everyday Value White Corn Tortilla Chips and have a milk allergy, beware: Whole Foods this week announced a recall of the chips because the product may contain “undeclared milk,” the U.S. Food and Drug Administration said.

“People who have an allergy or severe sensitivity to milk run the risk of serious or life-threatening allergic reaction if they consume this product,” the FDA said when it announced the voluntary recall on Sept. 25.

The issue came to light after a “customer notified Whole Foods Market that the tortilla chip bag also contained other snack mix product,” the FDA said, noting the ”affected” products were removed from stores following the complaint.

(Reuters) – Hershey Co said on Wednesday it would buy Pirate Brands from B&G Foods Inc for $420 million in an all-cash deal, giving the chocolate maker rights to snack brands such as Pirate’s Booty, Smart Puffs and Original Tings.

The deal is expected “to be accretive” to Hershey’s financial targets as the company delves into the more than $2.5 billion cheese puffs market, Hershey said in a statement.

Hershey has been diversifying its business by adding more snacks to its portfolio as more American consumers opt for healthier snacks over sugary candies and chocolates.

The Corn Refiners Association unveiled a new logo in the form of a kernel that is intended to emphasizes the broad role that refined corn plays in everyday American life.

Critics often denounce the spread of corn acreage in the United States and campaigns against high-fructose corn syrup (HFCS) have led to declining consumer popularity and use by food companies.

CRA is still defending and promoting HFCS but is now pointing out that corn has many other uses.

In a news release, CRA said corn can be used in many products because the kernel is separated into its component parts — starch, protein, oil and fiber — which are then turned into products such as cornstarch, corn oil, sweeteners, advanced bioproducts, protein and animal feed.

Melbourne business owner Gerardo Lopez will receive the Mexican Federal Government’s award for Outstanding Mexican Abroad. The Mexican Ambassador will present Lopez with the award at the embassy in Canberra on Thursday 13 September.

Lopez is the first Mexican-Australian recipient of the honour, which recognises the Mexicans living abroad who have made a valuable contribution to sharing Mexican culture in their adopted countries.

INDIANA — An Indiana professor has set a new record. Not on academia but in the Guinness World Record books!

University of Evansville Professor Mark Valenzuela made history this week with, believe it or not, the tallest stack of tortillas in the world.

How long did it take to stack all the savory griddlecakes? Two hours, which Valenzuela says was worth it.

Health-conscious consumers are helping to drive a steady rise in tortilla sales as manufacturers work to meet their diverse dietary demands.

According to research firm FMI, more than 40 percent of consumers buy tortilla products on a weekly basis. Global tortilla sales are forecast to exceed $12.3 billion by 2028 while growing at an annual rate of 3.7 percent, Baking Business reported.

To help understand pH and equilibrium imagine two lakes.  The lake on the left is alkaline and the lake on the right is acidic. An underground tunnel or cave connects the two lakes.  If the level in the alkaline lake is higher than the acidic lake, some of the water flows through the cave into the acidic lake. Eventually the levels of the lakes are equal or at equilibrium.  In a similar manner the amounts of the alkaline and acidic ingredients in a tortilla will reach equilibrium , which is the final pH of the product.  The time to reach the final pH, i.e. the size of the tunnel, is determined by the solubility and reaction rates of the acids and bases in the tortilla.  To make great tortillas we need to regulate the amounts and types of alkaline and acidic ingredients.
The impact on pH of common ingredients is indicated in Table 1. The strength of many acidic or alkaline ingredients is known but those ingredients with an asterisk (*) have variable strengths or impacts on pH.

* Neutral ingredient but will buffer tortillas causing the tortilla pH to rise.

The alkaline compound in flour tortillas is almost always sodium bicarbonate.  All acids react with (neutralize) sodium bicarbonate, form carbon dioxide and lower the pH of the dough.  Acids commonly used in flour tortillas include fumaric acid, citric acid, sodium aluminum sulfate (SAS), sodium acid pyrophosphate (SAPP), sodium aluminum phosphate (SALP), and monocalcium phosphate (MCP).  Acids less commonly used include ascorbic acid, malic acid, adipic acid, sorbic acid, and propionic acid.  Citric acid is soluble in water and reaches an equilibrium pH in the mixer.  This expends most of the sodium bicarbonate in the mixer and little remains for leavening in the oven.  This is undesirable for flour tortillas.  When using acids that are less soluble in water, like SAS or fumaric acid, reaction rate is lower and it may take several hours or days for the tortilla to reach equilibrium pH.
Tortilla Manufacturers often ask how to measure the pH of flour tortillas.  The principal of equilibrium that was just explained is often over looked.  Tortilla Manufacturers who measure the pH of the dough are surprised when the baked tortilla has a different pH.[1] Try measuring the pH at three stages during production:  (1) after the dough is mixed, (2) immediately after the tortilla is baked and cooled, and (3) after 24 hours in a package at room temperature.  Often the pH of the tortilla decreases a small amount (0.1-0.3 pH units) during the first 24 hours after production.  Records of pH for each formula will provide a basis as to when the pH should be measured and their acceptable values. By having these records, production managers will know if the pH of dough is appropriate or what the pH of the tortilla will be in 24 hours.
Table 2: pH of tortilla dough and finished tortilla at different stages of processing and storage with different leavening acids. [1]
a Leavening acids are used to neutralize sodium bicarbonate in chemically leavened baked breads.
b Sodium bicarbonate encapsulated.
c SALP = Sodium Aluminum Phosphate.
d SAS = Sodium Aluminum Sulfate.
e Sodium bicarbonate regular.
f Sodium bicarbonate fine.
g SAPP-28 = Sodium Acid Pyrophosphate with reaction rate of 28.
[1] Adams, J.L. and R.D. Waniska, Effects of amount and solubility of leavening compounds on flour tortilla characteristics. Cereal foods world, 2002. 47(2): p. 60, 62-64.
By: Daniel J. Brooker
(C) 2010 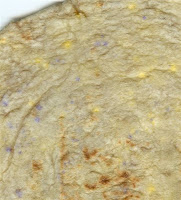 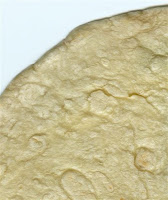 Both of the tortillas above have the same pH when tested in a beaker. However, they clearly do not have the same pH on the surface of the tortilla itself. Each of these tortillas have been sprayed with a solution of Bromocresol Purple 0.04% w/v. On the left tortilla, the yellow spots indicate low pH and the blue spots indicate high pH. This tortilla on the left will mold in the areas of high pH. The tortilla on the right does not show any “hot spots” for pH. These spots of low pH (yellow) are probably due to particles of fumaric acid that did not completely dissolve in the tortilla. The spots of high pH (blue) are probably due to particles of sodium bicarbonate that did not completely dissolve. This demonstrates the importance of the particle size and solubility rates for ingredients that contribute to the final pH of a tortilla.
By: Daniel Brooker

The following is a practical and economical method that can be used in the tortilla factory.  A laboratory oven is suitable for this application and should be able to dry several samples at once.  This minimizes the time needed per sample analysis versus using a moisture balance, which can only dry one sample at a time.

Procedure:
1.    Weigh a small glass or metal container.
2.    Weigh 10 g of the tortilla ground in a coffee grinder into the container.
3.    Dry the sample for 24 hours in a 105-110°C oven.
4.    Reweigh the sample, subtract the weight of the container, and determine the moisture content using the following equation: